EPH is an hyper-heuristic that has been implemented by David Meignan for the CHeSC’11 challenge (5th place). The hyperheuristic is described in an article that has been presented during the OR53 conference (2011)

A simplified version of EPH with a graphical user interface is available as an executable JAR file. The interface shows the process of EPH. In particular it displays dynamically the evolution of the sequences of operators and the cost of solutions. The demo is packaged as an executable JAR file that does not require any installation, but necessitate the last Java RE.

Note that this demo does not include all features of the version of EPH submitted to the CHeSC 2011 competition. Please do not use this demo version for computational comparison purposes. (See the next section “EPH-CHeSC 2011 version” for the version submitted to CHeSC’11.) 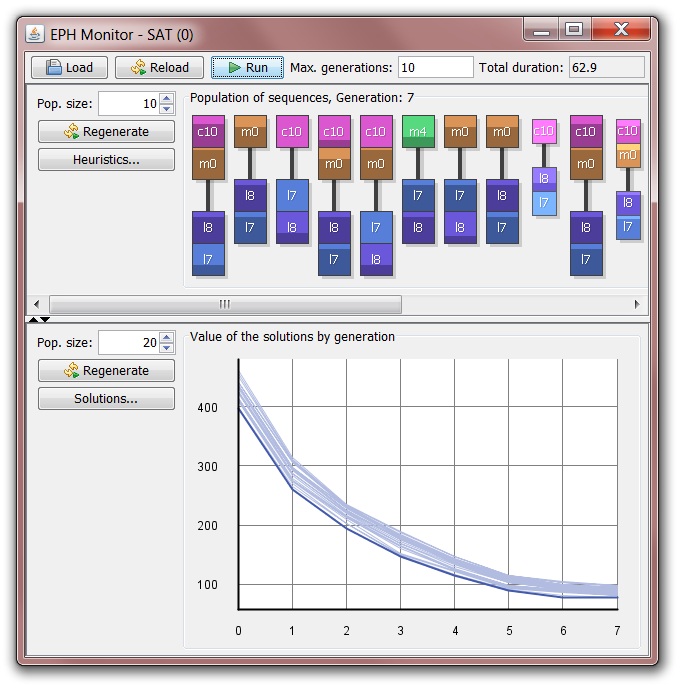 The source code of EPH is available on GitHub. Please note that the code of the EPH method (in the class EPH.java) is the original code developed for the CHeSC challenge held in 2011. Hence, it is not particularly well structured and it was not intended to be published (but after several requests it is).

The following JAR file is the binary version of the hyper-heuristic “EPH” submitted to the CHeSC’11 challenge. The JAR file can be used as a library in a Java project in combination with the “chesc.jar” library available on the competition website.